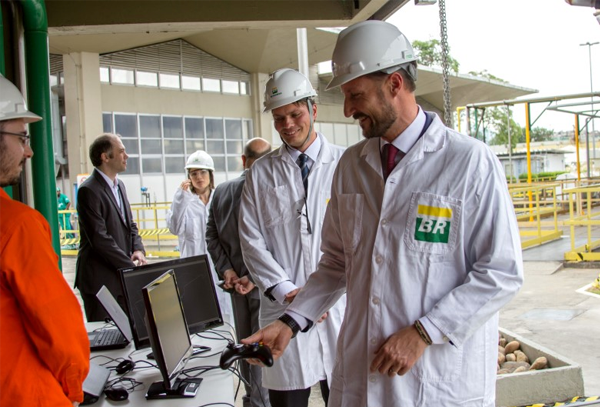 The prince of Norway, Haakon Magno, and his entourage participated in a demonstration held under simulated industrial conditions of the prototype of the Doris robot at the Petrobras Research Center in November 2015. The project is the result of a partnership between the Federal University of Rio de Janeiro (UFRJ), Statoil and Petrobras.

The mobile robotic system for remote inspection of offshore installations, called Doris, allows frequent monitoring with the possibility of small interventions in areas with complex structure and low accessibility.

The robot is a teleoperated vehicle, which moves through rails, and is capable of capturing and analyzing audio, video, thermal images, vibration and atmospheric composition. It has intelligent processing for diagnostics and alarms. In addition, it can be installed on platforms that are already in operation, with no need for re-design. There is no prediction yet for field trials with the Doris robot.

Anders Røyrøy, Researcher at the Statoil Research Center in Norway, pointed out that the Doris robot can bring great results to Statoil. "When applied in operations, the Doris robot can benefit Statoil in different aspects, such as increased uptime, health, safety, environment and logistics," he said.

Peter Derks, who is responsible for the project at Rio Research Center, says he is very happy with the development of the project because, after about three years of execution, the project has already achieved its goals and objectives. "We are pleased with the results obtained, with the most important delivery being the large-scale demonstration tested at the Petrobras Research Center (CENPES)," he said.